Rethinking The Oceans – Towards the Blue Economy 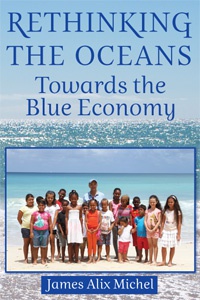 Purchase: Amazon or from Paragon House

The world has come to a crossroads. By the end of this century the total population is expected to exceed ten billion, but the area of land to support this is finite. Indeed, with climate change, some of the most valuable land areas will be lost, much of it as a result of rising sea levels. To sustain life on earth, new ways have to be found to grow food, generate energy, and conserve the environment on which our future depends. Fortunately, when faced with a challenge of such consequence, people prove to be remarkably inventive. In this case, solutions are by no means beyond reach.

We can start, quite simply, by looking out to sea. There, stretching to the horizon, lies the future. Remarkably, the oceans cover two and a half times the extent of terra firma. Yet we have always taken far less interest in the sea than the land. But what if we change our thinking? Instead of continuing to see the land as our future, suppose we put our trust in the sea. For solutions to some of the earth’s most pressing problems, the oceans may be our salvation, the source of untapped economic wealth. Within these waters can be found the elements of what is now widely known as the Blue Economy, the new frontier for human development. It is a twenty-first century concept to meet a twenty-first century challenge.

This book explores all aspects of the Blue Economy. Where does the idea come from? What does it include? How can it transform traditional economies? Can it be sustainable? And what needs to be done to ensure its universal adoption? James Alix Michel, President of the Republic of Seychelles, at the time, was ideally placed to write this book. He has in recent years pioneered the concept, first within his own nation and then in international gatherings, urging world leaders to take a fresh view of our oceans.

"President Michel has been at the forefront of the Blue Economy concept since the subject started making headline news, and this book therefore should be read by anyone seriously interested in the future of the oceans." —  Sir James R. Mancham, KBE Founding President of the Republic of Seychelles.

“At such a challenging time, it is essential to have a leader who clearly understands both the changes required to protect our environmental legacy, and the need to build, in parallel, an inclusive society that creates economic growth and security for its citizens in a sustainable way... Seychelles was one of the first countries to recognise that caring for the oceans opens doors to opportunities for the growth of coastal communities and, particularly, Small Island Developing States devoid of extensive land. But the country also understood that any such growth requires a clear commitment to sustainability. This is one of the core messages President Michel and his team have championed since 2012.”- Director-General of the Food and Agriculture Organisation (FAO) of the United Nations, Mr. José Graziano da Silva, in his foreword to the book.

“Rethinking the Oceans is an important contribution to policy discussions for a sustainable and prosperous world. President Michel and the Seychelles are implementing ideas to harness more of the ocean’s resourses while retaining pristine waters and beaches. These ideas should be taken seriously everywhere.” — Gordon L. Anderson, Ph.D., Editor-in-Chief International Journal on World Peace.

Island Nation in a Global Sea

The book is a collection of speeches and analysis of those speeches by President Michel, which shares the story of the many challenges and sacrifices in the making of the ‘new Seychelles,’ a modern country, by the leader who delivered promises over a ten year period. »

This is the story of a man of courage, a story of our times. In 2011 President James Michel published his autobiography and shared the journey of his political career and private life. He begins his story as a boy. »

A Man of the People