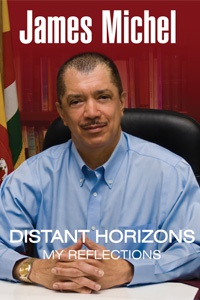 This is the story of a man of courage, a story of our times.

In 2011 President James Michel published his autobiography and shared the journey of his political career and private life.

He begins his story as a boy;

As a young boy, I would often walk barefoot along the sandy beach of Anse à La Mouche on Mahé’s west coast. The shoreline was lined with takamaka trees and the pungent smell of their blossom wafted on the breeze. Alone in my thoughts, I launched my little boat made of coconut husk and looked across the turquoise sea to the distant horizon, wondering what lay beyond. At night, I turned my head to the dark, tropical sky peppered with the bright lights of a myriad of stars, and again I sought answers. Our own planet seemed so small within this vast universe. There was so much to discover, so much to do.

Of course, then, I had no idea about my own destiny. Certainly, if anyone had suggested that I would one day be President of our nation (which was still a colony, with any thoughts of independence still a distant dream) I would have been disbelieving. Being smaller than most of my contemporaries, shy and quite timid as a youngster, a boy who liked nothing more than to sit under a tree reading a book (whenever I could get hold of one), the very prospect was beyond my comprehension. And yet, that is exactly what subsequently happened: my appointment in 2004 as President of the Republic of Seychelles. It was not something that I had striven for but I was willing to serve my country in any way I could, and when the opportunity arose I was proud and ready to step forward……

“James Michel has penned a forthright account of a tumultuous life and the birth of a liberated Seychelles. He tells what he did, why he did it, where he succeeded, where he failed and what still remains to be done. This book should be mandatory reading for all public servants, who purport to serve the people.” Chris Mole, Member of Parliament for Ipswich 2001 - 2010 and former Transport Minister, UK

“Few politicians have the ability to make memoirs interesting. Michel is different. This book is a compelling story of extreme poverty and destitution, slavery, foreign masters, emancipation, revolution and the birth of an independent nation”. Ravi Sharma, Producer & Presenter, Sunrise Radio & TV, UK

“Most people will have the briefest knowledge of that earthly paradise called the Seychelles but if there is one person who can introduce the wider audience to the modern political, social and cultural history of the Seychelles then it is surely James Michel. Anyone who cares about the future of the region needs to read it now and they will be as entertained as they are educated.” Stephen Pound, Member of Parliament, House of Commons, 2011.

“James Michel is a man of vision, who has worked tirelessly to see his nation transformed from a colonial outpost in the Indian Ocean to a model of racial harmony, social opportunity and international standing. The lessons for us all make this an essential read”. Dr Sathi Ludhianvi, Political commentator, writer, broadcaster & journalist, London, UK

Rethinking The Oceans – Towards the Blue Economy

The world has come to a crossroads. By the end of this century the total population is expected to exceed ten billion, but the area of land to support this is finite. »

Island Nation in a Global Sea

The book is a collection of speeches and analysis of those speeches by President Michel, which shares the story of the many challenges and sacrifices in the making of the ‘new Seychelles,’ a modern country, by the leader who delivered promises over a ten year period. »

A Man of the People