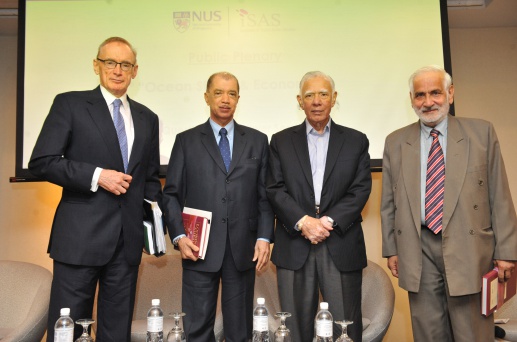 Unleashing a new generation of entrepreneurs for the Blue Economy

Former President James A Michel has addressed a high-level meeting of the Institute of South Asian Studies (ISAS) of the National University of Singapore on “Maritime Governance in South Asia: The Potential for Trade, Security and Sustainable Development,” which took place today.

In his keynote address, Mr. Michel spoke about the Blue Economy not simply as way of about making greater use of the sea but about making better use of it too by recognising the importance of sustainability and the need for invention.

“We should look not simply at the way the sea has been used in the past and replicate that. Of course, we must listen to fishermen and boat-builders, divers and ship’s captains, who have a deep understanding of the sea and what it can offer. But we must also invite some of the world’s best minds to turn their attention to the oceans, breaking new frontiers of knowledge and application,” said President Michel.

He highlighted the opportunities that a new generation of young entrepreneurs for the creation of new business opportunities.

“The success of the Blue Economy will depend on unleashing a new generation of entrepreneurs who can match the impact of the likes of Bill Gates and Steve Jobs in the legendary Silicon Valley. Can we anticipate individuals who can do the same for the Blue Economy, creating a global transformation in our use of the sea? We can learn much from the example of the Information Age pioneers. Their success was not a result of top-down planning. Instead, young people found their way to a particular locality, attracted by an absence of inhibiting rules and regulations, by the inspiration of being with other like-minded individuals and by the proximity of the world-class Stanford University. They made good use of vacant garages and front-rooms, dressed casually and played loud music. Their genius was not only to come up with ground-breaking ideas but to turn these into business opportunities. It was a heady mix but surely we could imagine comparable clusters of bright young people at different points around our oceans,” he said.

He added that he had for long put his trust in the youth of Seychelles and that he wished for them to join other young people of countries of the region and give them free rein to develop new ideas for entrepreneurship.

Mr. Michel highlighted the potential economic rewards for the nations that chose to develop the Blue Economy, but also noted the constraints that remain such as the diminishing yields of the main fisheries, which he said can be reversed if catches are carefully managed to allow for new stock to flourish.

“One has only to stand on the shore to feel the power of the waves and to sense the hidden currents, all of which will surely one day be converted to an inexhaustible supply of renewable energy for use on land; and beneath the surface of the sea is a diversity of plant life and living organisms that are already being harvested for use in pharmaceuticals, cosmetics and health foods,” he said.

During the course of the high-level meeting, President Michel was joined in a panel discussion on ‘Ocean States and Economics’ by Professor Bob Carr, former Australian Senator and Foreign Minister as well as Professor Gopinath Pillai, Chairman of the Institute of South Asian Studies (Singapore) and Ambassador-at-Large, Ministry of Foreign Affairs of Singapore, and Distinguished Fellow of the Institute for Defence Studies and Analyses (India), Professor SD. Muni.

Mr. Michel also met with some students and academic staff of the National University of Singapore, and also spoke about his book, Rethinking the Oceans – Towards the Blue Economy, which was published in June.

The high-level meeting discussed the various geopolitical tensions in the Indian Ocean and Pacific regions, maritime governance in South Asia, the rise of new Asian powers and economic development.