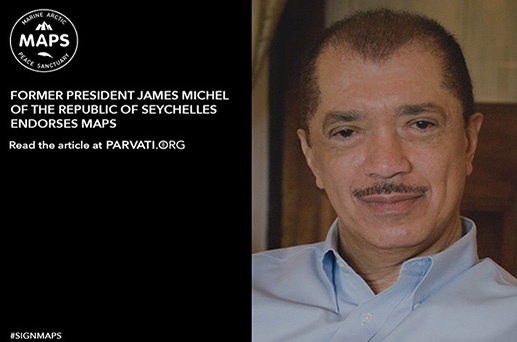 James Michel, former President of the Republic of Seychelles and the Founder and Chair of the James Michel Foundation, has given his support to the Marine Arctic Peace Sanctuary (MAPS).

The Arctic Ocean’s vulnerable ecosystem is now at risk of commercial and political exploitation, which threatens to destabilize the region even more. A melted Arctic Ocean cannot maintain the Earth’s climate equilibrium, resulting in more frequent and intense weather events, threatened food production and water supply, poverty, disease, more climate refugees and ever-increasing suffering for all of humanity.

The Marine Arctic Peace Sanctuary is an immediate, simple and free solution to multiple pressing global issues. It stops all activity in the Arctic Ocean that harms the melting polar ice, and ensures the regeneration of this essential ecosystem for the sake of all life on Earth.

“It is an honour and a pleasure to commit the full support of the James Michel Foundation to the Marine Arctic Peace Sanctuary (MAPS),” says Michel. “In so doing, my Foundation aligns itself unreservedly with other like-minded organisations and individuals whose goals and objectives are to save our planet from both manmade and natural disasters. The Arctic – no matter where we come from and where we live – is the common heritage of all humans. Its fate and future have serious consequences for all of us, not least for Small Islands Developing States (SIDS). We are all too aware of these consequences.”

SIDS nations are particularly vulnerable to the heating of the Arctic Ocean and the loss of the reflective polar ice cap. Rising global ocean temperatures are causing mass bleaching events for coral reefs in tropical waters around the world. As oceans warm, air temperatures also climb and accelerate the melting of land-based ice in the polar regions. The loss of the vast ice sheets cause billions of cubic meters of water to flow into the oceans which contribute to sea-level rise and disrupt the lives of millions in coastal regions and island nations.

“As the polar ice caps melt, our low-lying islands face the imminent threat of being submerged and our people becoming environmental refugees,” says Michel. “Some, for selfish short-term gains and profits, through their reckless activities and actions, are accelerating this process at an alarming rate. We cannot allow this to happen.”

To prevent exploitation of the key climate-regulating Arctic region, Parvati.org created the international MAPS Treaty. The MAPS Treaty prohibits all harmful and risky human activities in the Arctic Ocean including military exercises, commercial shipping, seismic testing and oil and gas extraction. It has been translated into all official UN languages, provided to all 193 UN member states, and shared with officials at COP21, COP22 and COP23.

“We are honoured that President Michel has given his support for MAPS,” says Parvati.org founder Parvati Devi. “Mr. Michel understands that we are all interconnected with the health of our oceans. The James Michel Foundation’s dedication to working together with people all over the world to protect nature is truly inspiring. We are delighted to partner with such an open-hearted statesman to realize MAPS.”

Citizens of all nations are urged to sign and share the MAPS petition at https://parvati.org, and to call on their governments to ratify MAPS immediately.