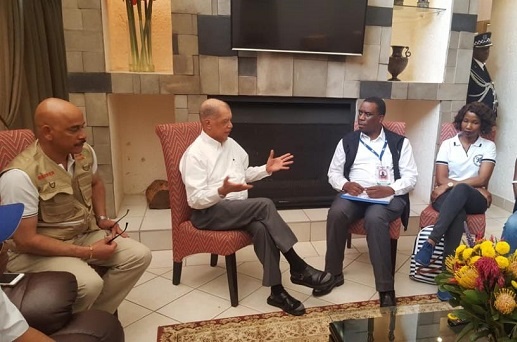 The Head of the AU Elections Observation Mission to the Kindgom of Eswatini, Former President James Michel has launched the works of the mission during a meeting with the 30 AU short - term election observers.

The meeting at the Lugogo Sun Hotel in Ezulwini Valley just off Mbabane the capital took place in the presence of the AU Director of Political Affairs, Dr. Khabele Matlosa.

Mr. Michel reminded the observers that AUEOM’s presence in eSwatini is part of the mandate of the AU to promote democracy and democratic elections in Africa, in line with AU’s overall vision for an integrated, prosperous and peaceful Africa, driven by its own citizens and representing a dynamic force in the international arena. ‘Your work as observers is critical to the attainment of AU’s vision and goal, and in ensuring that the elections in eSwatini are democratic, credible and peaceful’ he observed.

Later, Mr. Michel who is representing the Chairperson of the African Union Commission, Mr. Moussa Faki Mahamat was briefed by the eSwatini Royal Police on their level of preparedness and deployment for the elections, especially for the main voting day on September 21. He was accompanied at the Police Headquarters by the Director of Political Affairs, Dr. Matlosa.

This afternoon Mr. Michel received a delegation of the Southern African Development Community (SADC), lead by its Head of Mission, Mr. Highvie Hamadudu. They exchanged notes on their observations so far. SADC has also deployed a team of some 30 observers to the eSwatini General Elections.