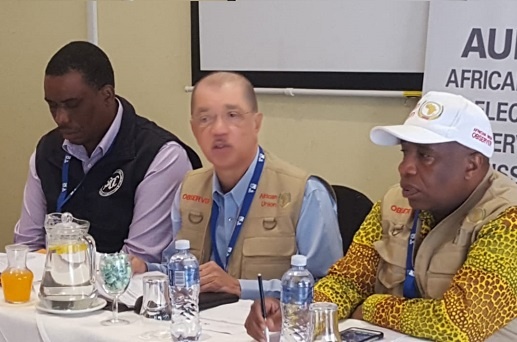 Eswatini’s General Elections 2018 were conducted in a peaceful environment. The Electoral and Boundaries Commission administered the election in a professional manner, despite long delays in transporting the ballot boxes to counting centres and counting itself which started very late after the close of polling stations, concludes the African Union Electoral Observer Mission to the Kingdom.

The AU’s preliminary statement was presented to the media, local stakeholders and international observer missions by the Head of AU Mission, former President James Michel, in the presence of AU’s Director of Political Affairs Dr. Kabele Matlosa at the Royal Swazi Hotel, close to Mbanbane, the capital.

Mr. Michel explained that the preliminary statement is issued based on the Mission’s consultations and observation of the voting process. It focuses mainly on the pre-electoral and election-day observations and findings as it comes ahead of the completion of the entire election process. The assessment of the electoral process in its entirety will be contained in the Final Report, which would be released approximately two months after the end of the election process.

“The Final Report will examine in detail the extent to which the 2018 elections were conducted in accordance with the AU Charter on Democracy, Elections and Governance and other international standards for democratic elections, as well as with the legal framework of eSwatini. More importantly, it would also provide concrete and constructive recommendations for the authorities in eSwatini on how the process might be improved or brought more closely in line with AU principles for democratic elections”, elaborated Mr. Michel.

Earlier in the morning, the AU hosted an exchange session with other international observer missions and diplomatic watch groups to discuss their findings. The observers were generally consistent in their observations and recommendations. The SADC Observer Mission will present its preliminary report tomorrow.

The majority of voters went to the polls yesterday to elect their members of Parliament as well as local government representatives.