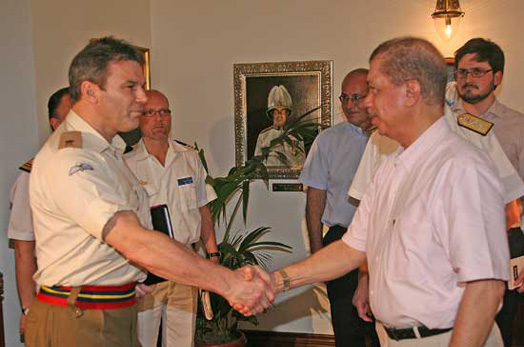 March 19, 2010 -- The Seychellois authorities have been thanked for all their support in the fight against piracy.

He said after the meeting that they discussed various issues related to the fight against piracy and Seychelles' efforts to protect its territory from this scourge.

Mr Bauza said the "problem of piracy cannot be addressed only by military means, but it needs the cooperation of all the partners in the region".

After thanking the local authorities for all the support he expressed satisfaction with the cooperation the Atalanta operation is getting from countries of the region.

The rear admiral praised the high level of cooperation between Navfor and the Seychelles coast guard. He said information flows very well, and the desire to combat piracy is very strong. He pointed out that in the past two weeks the European Union force has disrupted 11 attempted pirate attacks.

Mr Bauza said that with the increase in attacks, the greatest challenge and most acute problem is the expanse of ocean to patrol.