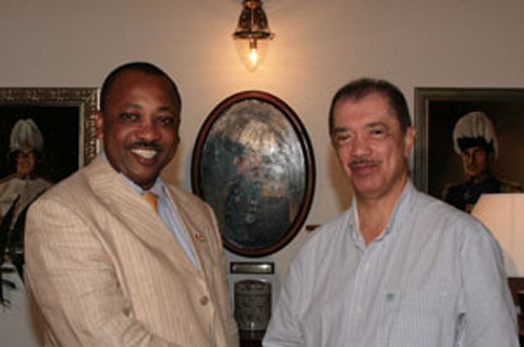 May 19, 2010 -- The executive director at the African Development Bank (AfDB) responsible for the eastern Africa region, Mr Peter Sinon, called on President James Michel yesterday as part of his farewell tour.

Mr Sinon, a Seychellois national, said calling on President Michel at State House was officially to thank him for his trust and confidence in nominating him for the post at the AfDB.

He noted that it was also a chance to thank the government and people of Seychelles for trusting him to do a good job, not only for Seychelles but also for all the other countries he has represented.

Mr Sinon was the executive director for Eritrea, Ethiopia, Kenya, Rwanda, Seychelles, Tanzania and Uganda. His farewell tour is taking him to all the countries he represented. His three-year contract with AfDB will end in June.

The former Seychelles high commissioner to South Africa pointed out that after paying all the arrears owed to the AfDB in 2007, Seychelles today has a great partner in the institution, with good relations and cooperation in various fields.

He saidÂ  his greatest achievement while working with the bank has been to help gain its guarantee and support for Seychelles' debt relief from creditors and also its support for our economic reform programme. Today Seychelles is being used as a success story for countries in the region that are going through the same reform process, he added.

Mr Sinon said he has chosen to come back to Seychelles once his contract with AfDB ends.

During his talk with President Michel, they explored ways to ensure another Seychellois occupies a post at the bank. Agricultural economist Alex Mend is the only Seychellois at AfDB, following Mr Sinon's departure.