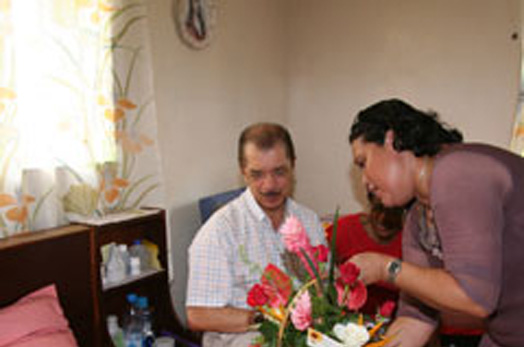 Mrs Colas gets presidential visit on her birthday

May 26, 2010 -- The household of Mrs Ephna Colas of Mont Fleuri yesterday welcomed a special guest at her 84 birthday celebration yesterday when President James Michel called on the bedridden senior citizen.

It was a double celebration for Mrs Colas who had asked to see the President during one of the Parti Lepep's district visits.

Mrs Colas is blind and suffers from Parkinson's disease but she managed to chat with the President in the presence of her daughter Edwige Andre and grandson Clifford Andre who is one of Parti Lepep's proportionately elected members in the National Assembly.

Other members of the family and the district's administrator Flavie Laporte were also present.

Mr Michel took the opportunity to wish Mrs Colas a happy birthday and p[resent her with a hamper of goodies.

She also received a bouquet of flowers from the Mont Fleuri district administration office.