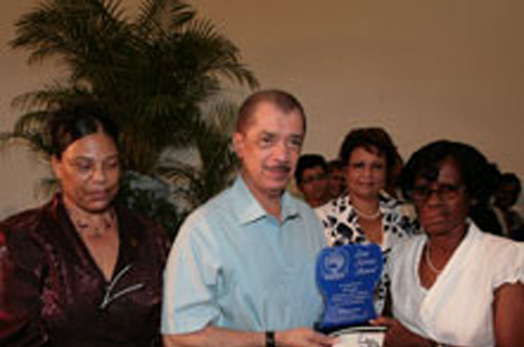 May 28, 2010 -- A ceremony this week to reward long-serving nurses and present certificates to others who had completed their studies was attended by President James A Michel.

Guests at the Wednesday ceremony heard that Seychelles' impressive health indicators have been achieved through nurse-led programmes of immense quality.

President James Michel was the guest of honour at the event, at which three other nurses received certificates after completing further studies.

It was organised by the Nurses Association of the Republic of Seychelles (Nars) as part of the activities to commemorate International Nurses Day on May 12, which was celebrated this year under the theme Delivering quality, serving the communities: nurses leading chronic care.

Mrs Mondon - also the patron of Nars - said nurses are at the centre of the whole cycle of care for patients with chronic diseases and have led the country's success in primary healthcare for over 30 years.

She noted that our maternal mortality statistics are low, mainly because of the exceptional efforts that nurses and midwives have put into delivering quality antenatal, labour and delivery care.

This, she said, also ensures that 99% of children in Seychelles are vaccinated against childhood illness.

Mrs Mondon added that our citizens live an average of 72 years, in large part because of the efforts of the nurses to address their lifelong health priorities. This includes giving education about risk factor reduction and healthy living.
Â
"Nurses have been and will continue to be key players in ensuring that Seychelles reaches the targets of the millennium development goals in style," she added.

Mrs Mondon said the presence of President Michel at the event is testimony to the government's great pride in nursing and also its strong commitment to making the profession fulfilling and rewarding for all those involved.

Addressing the nurses, Nars' chairperson Marie-Antoinette Hoareau reminded them that they need to be proactive in understanding the scale of the problem, and developing the right knowledge and skills to enable them to give adequate and appropriate care to patients.

She added that, most of all, they need courage, vision and commitment to play the leading role in prevention, care and rehabilitation of chronic illnesses.

Among the long-serving nurses ThérÃ¨se Cafrine, who spent 45 years in the profession, received her award from President Michel while 18 others were honoured for their service ranging from 35 to 44 years.

President Michel and Minister Mondon were also presented with a token of appreciation for their continuous support for the local nursing community, before new graduate Ms Thomas read the vote of thanks on behalf of her colleagues.