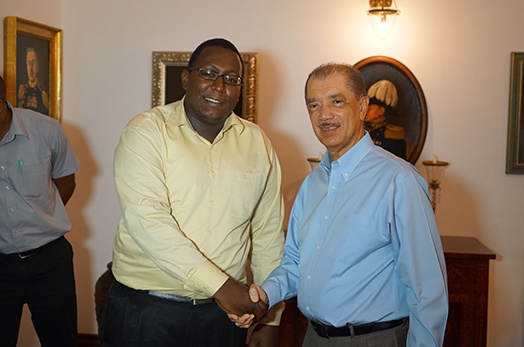 President James Michel received a young Seychellois, Mr. Jimmy Port-Louis at State House this morning. Mr. Port-Louis had won the special jury award with his project “Ocean Saviour” in the “Ambition Jeune 3” competition held in Mauritius. He was accompanied by the Head of delegation at the competition, Mr. Michel Pierre, member of jury at the competition, Ms. Christine Reginald and participant at the regional competition for young entrepreneurs, Mr. Jean-Paul Toulon.

The President congratulated Mr. Port-Louis for his achievement and commended the whole team for their determination in participating in the competition which is being supported by the Indian Ocean Commission.

“I am personally happy and I congratulate you for coming up with a project that centered on the Blue Economy concept. You have made Seychelles proud at this regional competition and rest assured that you as well as other young entrepreneurs who comes with such remarkable projects will have my full support. The Government will continue to assist and facilitate the promotion of entrepreneurship and innovation so that useful projects can become a reality and bring more prosperity for the Seychellois people,” said President Michel during the meeting.

Mr. Port-Louis, who is also a lecturer at the Seychelles Maritime Academy,  and the delegation briefed the President on the two-day competition as well as the project he presented before the jury which is about investing in a state-of-the-art fishing vessel powered by solar energy that would be used for long-line fishing. He explained that he wants to involve both, old and young fishermen on the vessel.

“It was a fruitful meeting and the President has shown great interest in my project as well as for Mr. Toulon. I will soon be put in communication with the Ministry of Finance, Trade and the Blue Economy and my colleague Jean-Paul Toulon will be in contact with the Ministry of Health. I would like to call on all young entrepreneurs to persevere with their projects so that it becomes a reality,” said Mr. Port-Louis.

The event had bring together young entrepreneurs from five regional countries including Madagascar, Mauritius, the Comoros and Reunion.

Also present at the meeting was the Diplomatic Advisor to the President, Ambassador Callixte D’Offay.