After twelve years as president of the Republic of Seychelles, and much longer before that in various political and administrative roles, Mr James Alix Michel will continue in his retirement to dedicate his time and energy to projects that will promote Seychelles as well as the achievements it has made.

One of his recent projects is the establishment of a personal foundation. The James Michel Foundation embraces different activities but focuses on the Blue Economy, Climate Change, and Sustainability. These are all key issues for the small island state of Seychelles. But they are also of crucial importance regionally – across the Indian Ocean – and globally. His task, he says, is to work with like-minded interests, to do everything possible to make a difference, using every means available, especially a pro-active “blue diplomacy” to further entrench the paradigm of the Blue Economy on the world development agenda.

During James Michel’s time in office, Seychelles’ response to the great challenge of promoting the Blue Economy, adapting and reducing the impact of Climate Change, and achieving the United Nation’s goals for Sustainable Development, was highly regarded, and the country won the support of its citizens and the international community alike for its efforts and achievements.

Apart from his work with the Foundation, James Michel is also engaged in international diplomacy efforts to ensure peace and maritime security, regional cooperation, trade and investment and the promotion of good relations between Seychelles' traditional partners as well as fostering new partnerships with countries of the region and beyond. 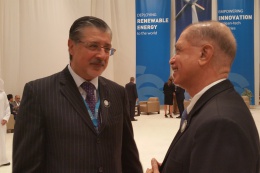